2019 NEEDS To Be The Year For Prevention…

Its 7:45am as I write this, and I’m currently sat on a plane on a flight to Tenerife. We’ve been awake since 2:30am, and 2 out of 3 family members are asleep next to me. It’s giving me time to reflect, to look back on 2018 and think about the new year that’s fast approaching.

Back in early February, I rented an ‘Air BnB’ for a few days and with my friend Rob, a videographer, and recorded a series of videos. Overall we managed to record about 8, longer ones where I spoke openly about dealing with my dads depression and shorter ones, that raised awareness around mental health and suicide.

“I don’t know how you can talk about things like that without getting upset” Rob said after we finished up a video about depression being the silent killer that took my dad from me.

“It’s because for the past 8 years I’ve gone through my own struggles, got help and been working on myself to be able to share this so openly now” I replied. On February 19th, I hit publish on the first video titled “This Could Make You Rethink Your Life” on Facebook with 0 expectations. With a background in content creation and digital marketing, I was hopeful that these videos could help people… but I never expected what followed as the months passed.

But when I take a closer look…

Here’s a few recent ones: 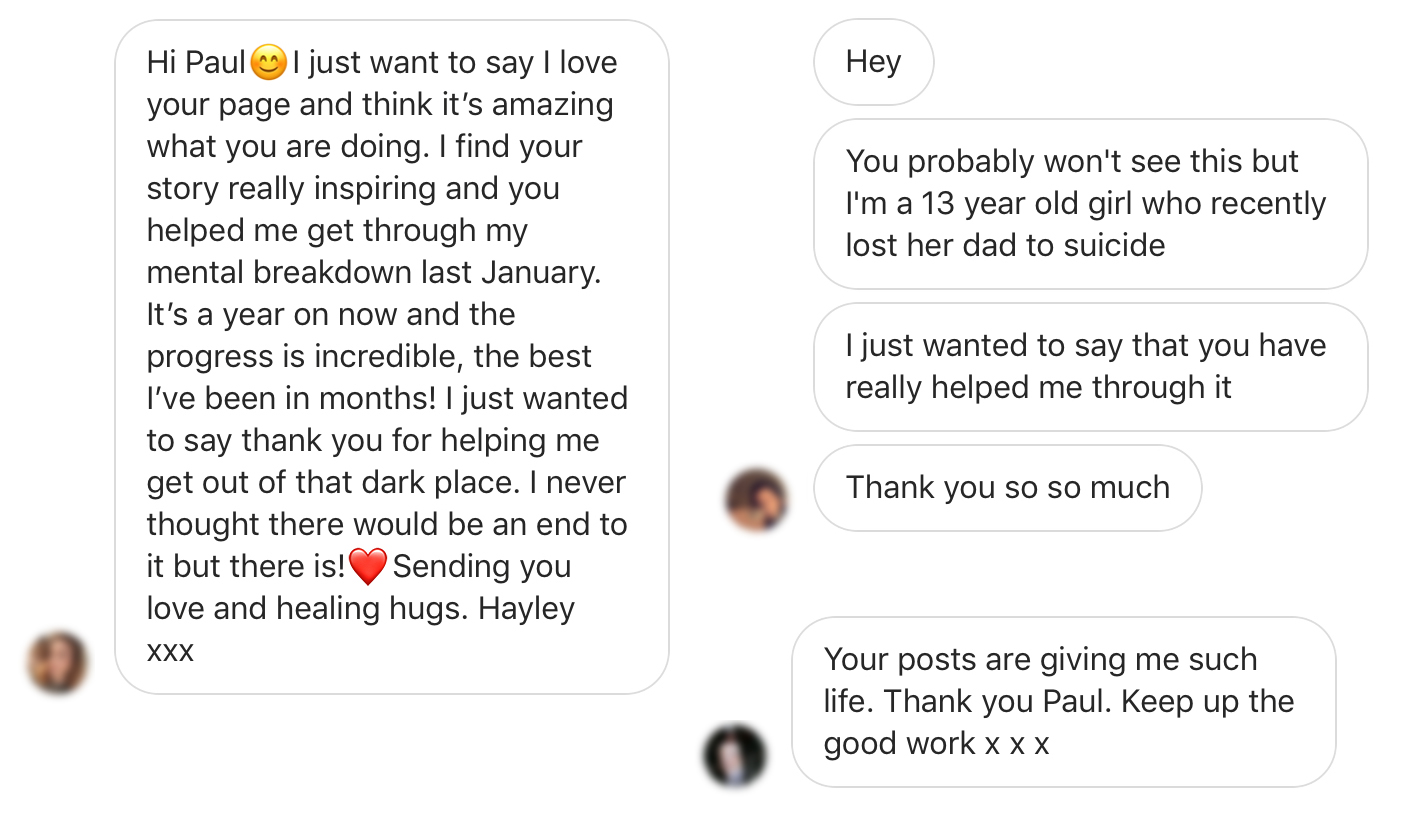 This is the first time I’ve actually broken things down like this, and I’m not sharing them to boost my own ego. I’m sharing them to express the gratitude I have for everyone who’s supported anything I’ve done in that time.

Those figures aren’t just what I’ve achieved either, they’re what WE HAVE achieved. Together. Because breaking down the stigma around mental health and suicide is something a lot of us are fighting against. And with every view, like, comment or share, you’re apart of the impact seen above.

I’m just sharing my efforts too, there’s been some amazing work done by 1000’s of individuals this year to bring awareness to mental health. It’s refreshing to see just how much ‘talk’ there is now, and with awareness, comes less of a stigma and more people no longer feeling ashamed to seek help.

Even with the awareness around mental health now, the funding, support, research and treatments are still lacking. More people are now seeking help, but simply entering a system which was too overloaded and not fit for purpose before this awareness started.

Children and young people on average have to wait 8 months before they see a therapist and get treatment.

Adults are being turned away because they’re not ‘mentally ill’ enough to get treatment. Only getting support when they’re critical, or after an attempt on their life.

We’re treating mental health challenges reactively, trying to deal with them when things progressively have got worse, rather than proactively, educating people of the signs and symptoms of mental illness.

Over 1 million prescriptions for antidepressants are issued weekly in the U.K.

Suicide claims the life of someone every 90 minutes in the U.K. alone, and that’s only recorded suicides. If we dig deeper, we’ll find that shocking statistic to be a lot higher.

Suicide is the biggest killer of young people, more simply put, the biggest threat to our children’s lives is themselves. Something needs to happen. Yes, things are slowly improving. Promises are being made. But when will these take action? How many more people need to lose their lives before we make the change that’s needed?

We’re desperate for support, for more funding and treatment for those who need it. The statistics are clear to see, and these aren’t just figures on a piece of paper… these are real lives. People losing their lives daily because of this broken system. The lives lost also negatively impact the people around them.

We need to start proactively treating mental health, rather than reacting when someone becomes critical.

This is a big question to answer right now, especially 35,000 feet up in the air, but all I do know is this year for me (alongside the continued awareness) I want to focus more on prevention.

Through fundraising for smaller charities where I know 100% of the money raised is going to helping those in need, by creating content that puts pressure on those who can make the decisions, I want to share the stories of others and how they’ve been let down by this broken system, and I want to continue delivering workshops within workplaces and schools to make them a safer environment. But this is where you come in…

How can we start working towards prevention?

What can we do to repair this broken system?

Why Multi-Tasking Is Overrated

How To Make A Fashion Blog In 15 Minutes
Discover More, Success

What I Think of Anti-Depressants
Depression, The Mental Health Blog
Find Out How I Can Help You
Send Me A Message
Together, Let's Break The