But I needed to put it out there to hold myself accountable.

I’ve wanted to learn a language for years, I’ve tried and failed, I hated languages at School and I never seem to last any longer than a week.

But after spending the weekend researching, I’ve got a new outlook… and I’m going to document the whole process.

First, as with any new skill I’m looking to acquire it’s important to clarify the final goal.

With language it’s very easy to believe the end goal should be a fluency similar to a native speaker.

But from what I’ve discovered from research and combining that with my own personal goals, I’m going to work towards being comfortably fluent… understanding and being able to have conversations in Spanish.

So in 12 weeks from now, I’m going to have the ability to hold conversations in Spanish.

I’m not expecting to know every word, or be able to master a Spanish accent but I’ll comfortably be able to understand and speak Spanish.

For someone who knows Hello, Thank you and Please at the time of writing this post it’s a tough challenge…

The End Goal: To speak and understand Spanish comfortably.

The issue with my approach in the past is wanting to be completely fluent in comparison to a Native. But from what I’ve learnt researching and what I’ll share with you later… it isn’t needed.

I want to learn Spanish to order good Tapas…

I don’t want to learn Spanish to get a degree on it, to be marked or tested on my grammar or to become as fluent as a Native…

I’m also more focused on the speaking and understanding, rather than the reading and writing of Spanish.

Hopefully the end goal is clear.

If I Don’t Achieve It…

To hold myself accountable, not only have I published this post for all to see but I’m going to put some more variables in place.

Accountability is the key to achieving a new goal.

Without accountability in place there’s only my willpower to hold me to achieving it.

So not only will I suffer embarrassment if I fail in 12 weeks time of this post going live, I’ll also do the following.

Sh*t. What have I got myself in for?

Here’s proof of that accountability…

Matt will hold me to the goal, he will take the money if I fail and this will motivate me to achieve it.

Sure his being supportive now, but things might change in a few weeks when he can start to sniff the £1,000…. 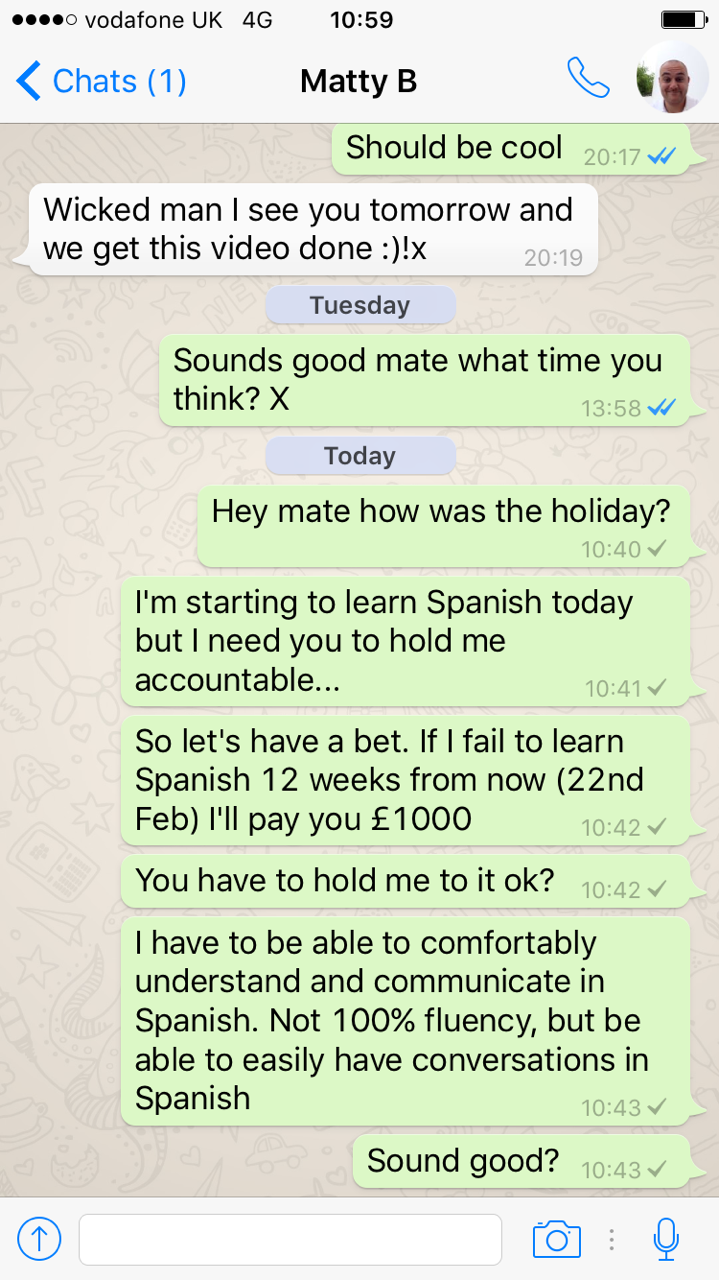 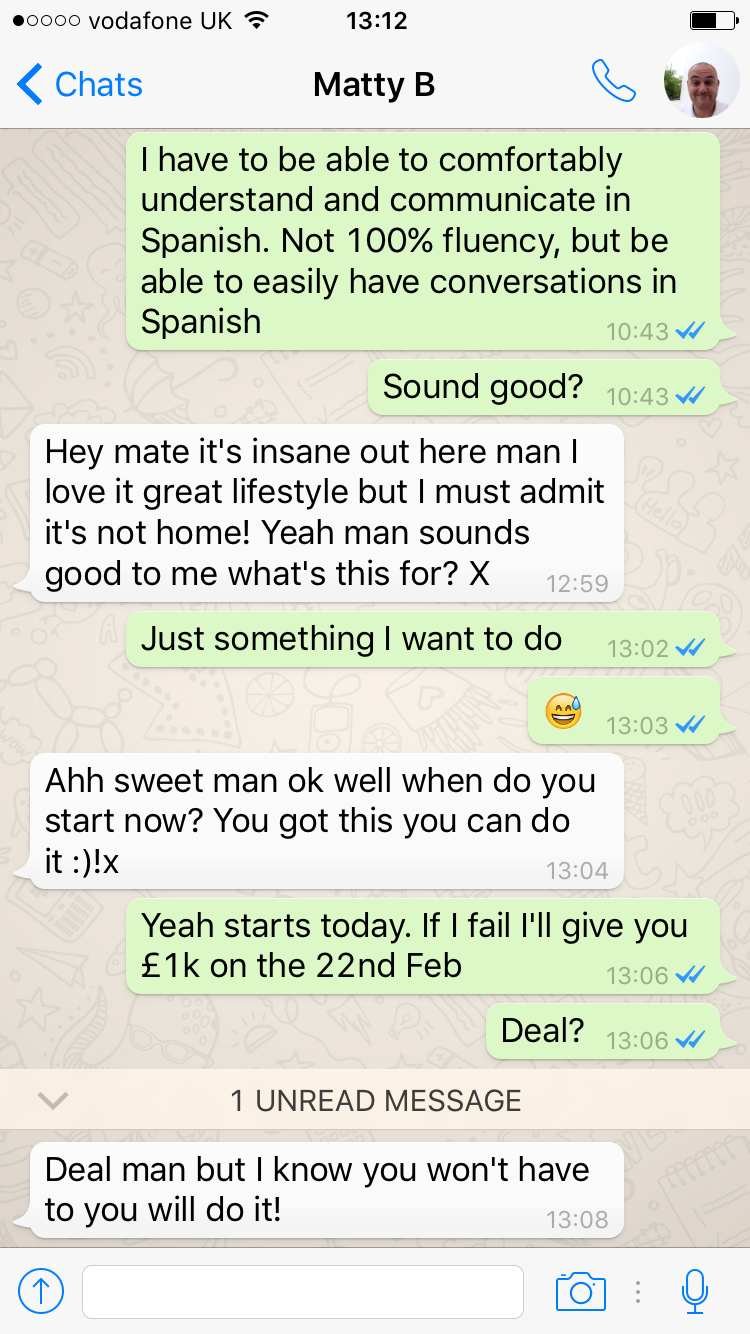 The suit jacket is another variable to hold me to the goal. Sure it’s secondary to the £1,000 and the public embarrassment but I really don’t want to burn this. 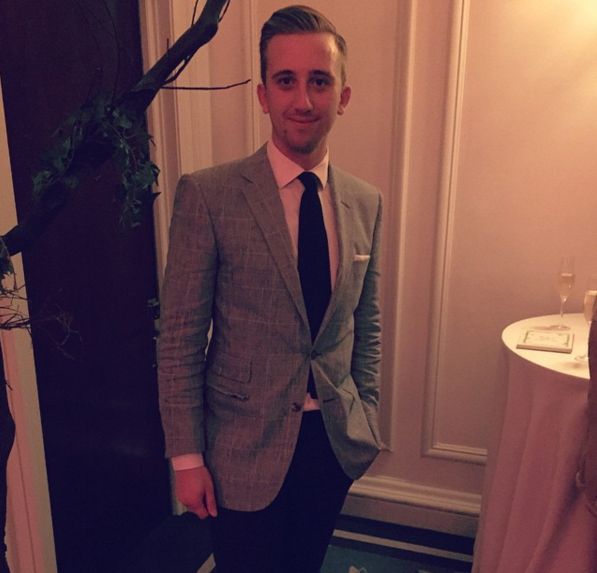 It’s a Gieves & Hawkes jacket which I’m planning on wearing for years to come. I can’t remember the exact price, but I believe it was around £500 when I bought it.

So to clarify if fail to reach the end goal as stated above, I’ll be publically humilated (as I’m documenting and sharing the whole process), I’ll give Matt £1,000 and I’ll burn the Gieves & Hawkes Suit Jacket.

How Will I Do It?

I’ve been a follower of Tim Ferris for a while, in fact his book ‘4 Hour Work Week’ was a life changer for me.

After reading his blog, reading ‘The 4 Hour Chef’ and ‘The 4 Hour Body’ I love how he deconstructs and learns a new skill.

I read about how Tim deconstructs and learns a new language and also got introduced to Benny Lewis.

Benny wrote ‘Fluent In 3 Months’ and has numerous interviews, videos, products and advice online that took up my whole weekend.

I was inspired by both Tim and Benny’s approach to language learning.

It opened my eyes to the possibility, and most importantly shifted my perception on approaching language learning.

I discovered the 80/20 principle about 4 years ago and introduced it into my business and other areas of my life.

The principle discovered by Pareto says that 80% of the results come from 20% of the input, material or effort.

Both Tim and Benny agree that the 80/20 principle can easily be applied to language learning.

Using the 80/20 principle I can deconstruct, learn and understand Spanish in less time than if I approached it the typical way. Again, I’m striving to reach about 90% – 95% of fluency not 100% which would take much longer to achieve.

Of course the individual word frequency will vary from language to language, but using this principle I’m going to discover the 300 words that make up most of the spoken word in Spanish.

Both Tim and Benny extend this list, sometimes up to 1,000 words so I’m going to do similar.

So using the above, I’m going to memorise the list of common words that make up a high percentage of the spoken language and I’m also going to learn some key phrases.

You get the idea…

I’ve got a list of 50 useful phrases which again I’ll be learning from the off.

My memory is awful, but being inspired by Benny’s self proclaimed awful memory too I’m confident I’ll be able to learn these phrases and words using various techniques.

Flashcards seemed to be a popular learning technique, something I’ll be applying.

Here’s how I aim to learn and remember the words and phrases.

The above utilises the components of a memorable word (A spelling, a sound, a meaning and a personal connection)

The above is a good example. Caber means to fit in Spanish. The image of a bear fitting in a cab allows me to strike a visual representation to remember the word ‘Caber’ means to fit.

Another example to demonstrate is ‘Equivocado’ – Which I’ve just found out means ‘wrong’ in Spanish.

To remember it I’ll picture an Avocado with a red cross through it. I’ll find an image online or just make it myself and put it on a flashcard. I’ll visually see an avocado, the red cross will show me that it means wrong and then I’ll be able to pull the word Equivocado from my memory. 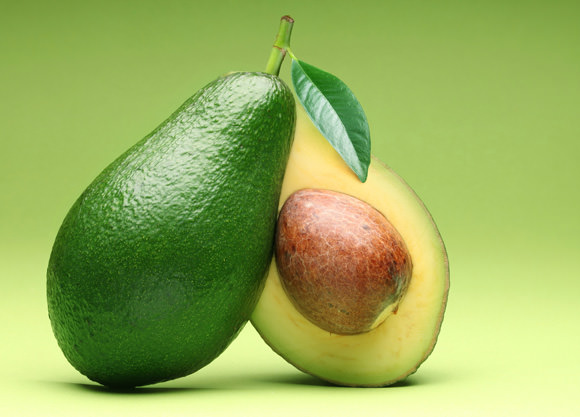 My Tools For Learning

There’s a few things I’m going to use to help me learn.

This will be broken down into the English meaning, the Spanish translation, a visual representation and the pronunciation.

The 625 most used Spanish words will be broken down as above.

I downloaded this last night and loved it. As recommended again by Tim and Benny it combines the above into a fun, enjoyable app I can use on the go. I’ll use this as a secondary to the above.

I’m aiming to spend an hour a day on the above, typically split into 3 sessions of 20 minutes.

Stage 2: Speak Spanish With A Native (Within The First Week)

Another thing I learnt from Benny was the importance of speaking Spanish in the first week.

I’m going to set up a call with a Native speaker on Skype for next Monday (7th December 2015).

Will I struggle to have a conversation? Of course.

Will I know what’s grammatically correct and what isn’t? Probably not.

But using the phrases I’ve learnt and the common words I’ll hopefully be able to have a small conversation with them.

The main purpose of this for me is to remove the fear of actually speaking it, and removing the fear of being judged if I get certain things wrong.

Doing it through Skype gives me an advantage, I can reference certain words, phrases and use translations if I need to. (Although I don’t plan too)

I’ve just set up with iTalki.com which I’ll be using to find a Native speaker to call.

By the way – I’ll film this. I’m guessing it will be super awkward.

I’m going to delay the Grammar side of it till later on, until I’ve learnt and memorised the common words and phrases.

This typically seems to be the best approach, as grammar then becomes more enjoyable and easier to understand.

From memorising common words and phrases first when I tackle the grammar side of it I’ll already know most of the words in the example sentences. Now I know the words, it’s just about discovering how the Spanish language puts them together.

I’ll hopefully naturally start picking up the Grammar too using ‘Memrise’ and speaking it from the off.

Another key element I found from researching and speaking to others was to live the language.

I’m going to start from week 2, after I’ve memorised a set of common words, phrases, and attempted to speak to a Native.

I’ll probably watch some of my favourite films in Spanish (with English subtitles).

I’ll listen to Spanish radio and Podcasts when I can.

In a nutshell, I’ll try to replicate the feeling of actually living in a Spanish speaking country.

I always find when I speak to someone who knows a language (especially English) they typically learnt it from watching English speaking movies and TV shows.

I’ll also speak to a Native weekly, and really keep pushing myself to speak it as much as possible.

It’s All An Experiment

As I’ve never learnt a language before this really is an experiment.

The above might change slightly, but I’ll document the process and me learning the language via video diaries released every 2 weeks.

There’s other methods of learning I found from researching…

Reverse learning (what Tim does) where you study a ‘Learn English’ book for Spanish speakers is one I might try.

Using Spanish cognates (words that are similar to English words).

The app Duolingo which has good reviews (if I don’t get on with Memrise).

But it’s all an experiment, so I’ll stick with the plan and introduce new ways of learning when I feel like I need too.

So there we have it.

I’ve put it out there and I start today.

I’ve got 12 weeks, I’m aiming to stick to an hour a day (sometimes less) and this is the plan I’m going to be working towards.

The end goal is to comfortably speak and understand Spanish and if I don’t succeed not only will I be publicly embarrassed I’ll give £1,000 to my buddy Matt and I’ll burn my favourite Suit Jacket.

What have I got myself in for?

Only time will tell.

Stay tuned for weekly updates on my progress and also for the final results in 12 weeks time (on the 22nd February 2016).

I’m excited, but nervous at the same time…

How To Beat Social Anxiety With Josh Morris

Men Have Feelings Too… Right?
Depression, The Mental Health Blog

How To Stop Your Money Worries
Success, The Mental Health Blog, Your Thoughts

How To Start & Dominate A Conversation
Success, The Mental Health Blog
Find Out How I Can Help You
Send Me A Message
Together, Let's Break The