But it’s important to talk about it…

Because that uncomfortable feeling around talking about or even thinking about suicide is just one reason suicide has become the leading killer of men under the age of 50.

Why do men kill themselves?

In fact, why does a man take his own life every 2 hours in the UK alone?

Why is the suicide rate increasing year after year and why out of all of the suicides last year, a massive 76% were men?

I strongly believe so.

After losing my Dad to suicide 6 years ago, I’ve consistently asked the same question many others who’ve been affected by suicide ask… Why?

Why did he do it?

What could we have done?

I’ve dropped into depression myself, I’ve experienced that deep dark hole many men will experience in their life and I’ve seen why suicide can become not just a choice… but the only choice.

Can suicide really be a choice if it’s the only choice available?

I’m sure that’s what my Dad felt, as ourselves and people around us kept asking the question of why he did it.

He had a well paid full time job, ran a Physiotherapy business from home in the evenings, had two sons, a wife who was his childhood sweetheart, he had a psychology degree, he was a runner who competed often, an athlete…

He had so many ‘reasons’ why he shouldn’t do it.

But through his breakdown his pain was far greater than any reason to stay here.

His perception of life had collapsed, darkened, and to him he’d lost all choice in life.

In fact in reflection the only choice he was in full control of was should I end this pain or fight it for another day?

When someone is in the situation of killing themselves they’re in control which is a feeling that makes them feel complete.

They feel like they’re not in control of any other situation of their life, but this situation right here right now, on the brink of taking their own life is their decision, it’s them in control.

The pain of living becomes unbearable, and people struggle to understand the pain people are going through to make that decision.

I sure did, I spent years asking ‘why’ and thinking I could have done more. 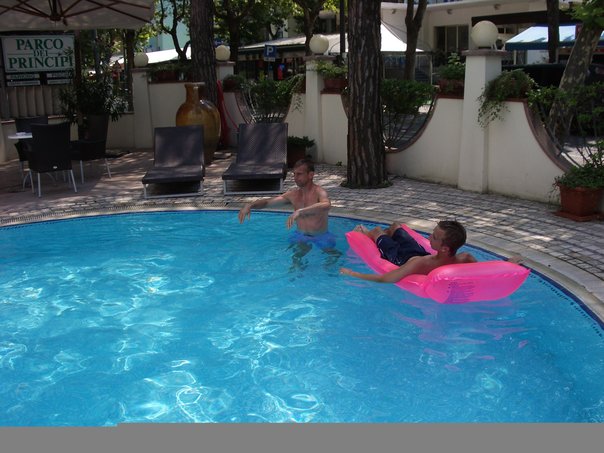 * Me and my dad on a family holiday.

When you hit that dark hole, when your perception of life collapses, the pain is far greater than anything to live for.

After listening to numerous people who survived their attempts on suicide and reflecting on my Dad’s suicide, a lot of them talk about the pain in which they wanted to end.

Not wanting it to hurt anymore, wanting the pain they’re going through to go away.

When you think of it, dieing is physically painful…

But the pain they’re in at the time of making that decision is far greater than the physical pain they’ll endure.

When my Dad decided to walk infront of a lorry reports from witnesses say after the collision… he smiled.

The physical pain he endured from the collision took away a far greater pain of his mental illness.

People who’ve been dragged from bridges preparing to jump have often been labelled as ‘limp’ from the people who save them. Their bodies are relaxed, lightweight and pain free.

The pain is over.

My Dad was in the best physical shape a guy in his mid 40’s could be when he died, but he never got the support for his unexpected fall to his mental health.

We weren’t given a manual on how to deal with it, and neither was my Dad.

If my Dad had broke his leg he’d be sent home in a cast, and we’d have instructions on how he’d get better. We’d be told to help him rest for a few weeks, he’d be told when he could get back to walking, back to running and back to full recovery. We’d be told what medication he was on and when he should take it…

When my Dad had a breakdown we had no instructions, we had no manual to know how to support him.

We took him to the doctors who prescribed some anti-depressants and he was sent home.

There needs to be more support, it needs to be openly spoken about and treated as it is… a health issue.

Suicide is a subject people avoid talking about, people don’t like to admit the times they’ve felt suicidal and this silence is a huge factor behind the shocking statistics right now.

4,624 isn’t just a number, it isn’t just a statistic, it’s the amount of men who took their own life in the UK last year.

The pain we went through as a family after my Dad took his own life, the pain we saw him go through, the amount of people around him it effected on paper just added an extra number to that ever rising figure.

As you read this you yourself have probably been affected by suicide, or at least know someone who is.

So let’s do something about it…

Here’s a few things we can do to help break the silence and overcome suicide.

By you reading this I’ve got you to think about suicide, something a lot of people still refrain from doing.

It’s important to remove any stigma around suicide and know it’s ok to think about it, talk about it openly and do something about it.

Spread awareness, share this article and let’s stop the silence.

We find it easier to openly think about, talk about and spread awareness about other illnesses but often feel uncomfortable doing so with mental health.

As a man it’s not a weakness to be open, it’s a strength.

Once the silence is broken, people start talking.

Help be apart of it.

When you change the way someone thinks about something it creates a movement. Think about it, speak about it, do something about it.

If you’re contemplating suicide there’s a hope inside you, we need you to be leaders in this conversation whether you’re ready to have it or not.

If you’ve been affected by suicide it’s also important to step forward and become a leader. Share your experience and talk about it openly.

I know how hard it is, but opening up and breaking that silence will not only make it easier it will help others too.

The painted picture of a modern day man is influenced by today’s society and again it’s important to ignore it or change it.

Lad culture, celebrity role models, social media, the news, workplaces and schools all have an impact on the way people perceive suicide and the meaning of being a man.

When was the last time you saw someone be acknowledged for overcoming that dark situation and avoiding suicide?

When was someone who overcame the pain and the hell they went through showcased on TV? Within the media? Across social media?

If more people stepped forward and shared their stories, and if the media and society allowed them to openly do so more hope will be installed in to others.

With awareness comes a shift in society.

No one has ‘committed’ suicide since the early 1970’s when suicide was decriminalised.

We need to stop saying ‘commit’.

It’s a health matter not a criminal matter and it shouldn’t be labelled as one.

People don’t like talking about things that are criminal, and by us labelling it as ‘committing’ suicide we’re making it harder to talk about.

Of course this small change isn’t going to solve every issue but it’s a small change which could help break the silence.

Deep depression can be helped but it’s something that needs the right support.

Having hope is an important factor to overcoming it.

Only the person in that situation can make that change but they need to have hope given to them from people around them, the health system and society.

£600 million is going to be invested into the NHS mental health system this year, and it’s important they invest wisely.

With the right guidance, support, medication and hope suicide doesn’t have to be the only choice.

Getting the above and being open about your emotions, increasing your self worth and surrounding yourself with positivity will help turn that deep dark hole to light.

Whether you write down how you feel and share it with someone, talk to a counsellor, a family member… just open up and talk to someone.

CALM is on hand to offer you support through their free phone support aswell.

There’s hope, but it’s important we break the silence and do something about it.

Start by sharing this article, and making more people think, speak and do something about it.

For more advice on how to overcome it, read some more posts here on this blog and download the eBook ‘Man Up or Man Down’ which you can get for free here (in the sidebar) today.

This Is Why Patience Is Powerful
72 Comments

How To Break The Silence Of Suicide
Depression, The Mental Health Blog

How To Make A Photography Website
Discover More, Success

7 Facebook Pages That Help With Depression
Depression, The Mental Health Blog
Find Out How I Can Help You
Send Me A Message
Together, Let's Break The